Third week in March and it has with a few exceptions been a sunny week. The biggest exception was Friday when there was an partial solar eclipse and it was very overcast. So those that had hoped to experience an eclipse was sort of fooled. I had researched a little and found out that I should have grey filter ND 50 on my camera to take pictures for it to be safe but was rather too late on it and they are very expensive too. But will probably get one for the next time I fly because I have wondered if it is good for the eyes to stare that much out through the window when I fly. But I am quite fascinated with the view when I fly, so I think I will get one anyhow even if it will quite some time to next eclipse in this part of the world.

Anyhow I took a walk circa forty minutes before the solar eclipse came to its height. It was noticeably darker, like a dark winter day, with a grey light, but not like it is at night. I then went inside for half an hour. When I came back out I stopped to see if there were any shadows from the trees but as it was overcast the shadows didn´t show. It was still like a dark winter day. But I looked up and saw the sun as a crescent and realised that this was it. Still overcast with clouds in front of the sun. I took the cd I had read that one could use instead for a grey filter and tried it on the camera but it didn’t turn out good so I chanced it as I reckoned the clouds would act as a filter. And they did. So I got pictures of the sun as a crescent. But this is important – don’t do it yourself. I could have been so unlucky that the clouds would have gone away completely and have damaged my eyes. I didn´t expect to get pictures of the sun, I reckoned that other people would do that much better with no risk to their eyes. My thought was to photograph how the light in the park looked during the solar eclipse. And perhaps try the cd trick that I checked out on an ordinary sun earlier in the week.

The solar eclipse is said to have been between 80 – 90 percent depending on where you are in Sweden. It was supposed to be 80 percent where I live. I managed to catch the start of the solar eclipse when the moon covers the sun from the right side and the middle of it when the sun is a lying down crescent. After that the cloud cover was too thick for the sun to shine through.

To experience the solar eclipse click on the gallery below.

The pictures this week are taken on Råbygatan and the solar eclipse is taken in Djupadalsparken in Limhamn in Malmö, Sweden.

More pictures on Skywatch Friday and on Our World Tuesday. 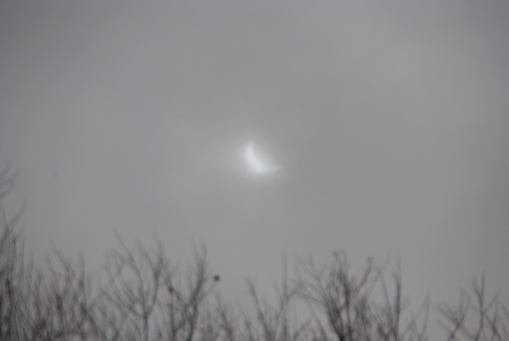 The sun just after I went out to have a look. The moon is said to cover 80 % of the sun. 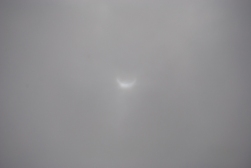 A few minutes later the sun was a lying down crescent. 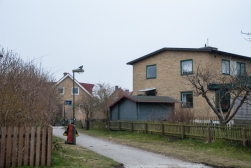 It looks like an ordinary grey day but a bit dark during the solar eclipse.

The sky was overcast so you only got a glimpse of an overcast sun now an then.

The birds were not disturbed by the solar eclipse.

The magpie was busy building his nest and didn´t notice the solar eclipse.

The sun is in this direction. As it was overcast so this is the strongest it got.

It became lighter very fast after the eclipse had passed.

9 thoughts on “Sunny and solar eclipse”

Welcome to my weather log and thank you for the visit!

This work is licensed under a Creative Commons Attribution-NonCommercial-NoDerivs 3.0 Unported License. All pictures on this blog are taken by me and I retain the copyright and ownership to them. They are downsized for use on this blog and only suited for use on the web. You are free to reblog and share as long as the picture isn´t used commercially and you give me credit for the picture and link back to my blog. You may not alter or remix or adapt any picture or make commercial use of my work.
Follow Weekly Weather on WordPress.com

London Underground Station at Canary Wharf – in another time

Stonehenge – in another time

On the road to Urchfont

The temple area Tenryū-ji in Kyoto

Recent Posts: From My Horizon

It could end at any time now

Peeking through a window

By the lake in the woods

My other photography blogs